What happens when a huge company with a vast budget decide to create a statement film to advertise their product in a fascinating and innovative way? Well…. this. Watch the video below to find out more… 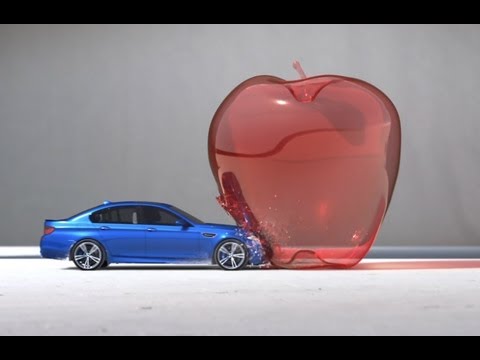 Called “Bullet Art”, BMW Canada presented this amazing video whilst hosting a talk about the M5 model. The super slow-motion footage is designed to highlight the cars durability, speed and performance. Either way, we love it and can’t help but feel a wee bit jealous of the people who got to work on this project. Superb.

When Brazilian agency AGE Isobar were given the task by their client, Camp, to advertise the fact that their fruit juice drink is all natural, they really went the extra mile.

They decided against spending the vast advertising budget on the usual expensive macro shots of dew covered fruits, glistening in the sun, or aspirational lifestyle shots of lush green fields and organic produce. Instead they decided to take a much more tactile approach which would ensure that Camp’s target market, Isobar’s potential clients, and indeed the rest of the world, would sit up and take notice.

Their innovative team created a concept where no packaging was required. Where the fruits themselves were the star of the campaign, just with slightly different outfits. The agency designed and created ‘juice box’ molds, which are then hung around the growing fruits on the farms in Paranapanema, São Paulo, Brazil. As the fruits grow to full size, they take on the shape of the molds and, amazingly, the branding of the client. These carton shaped fruits are then displayed in supermarkets as novelty advertising items for people to marvel at, eat and more importantly, tell their friends about: thus spreading the company name and the idea of their incredible freshness. Clever stuff eh? We love to see agencies pushing the boundaries and creating concepts which are unusual and inspiring. Advertising is a tough old game and many campaigns, however expensive and beautifully executed, are lost among the vast array of advertising concepts thrown at us all daily. What really stands out is work that has been well considered by a team who are passionate and keen to push the boundaries.

Many people have damned this campaign, saying that the idea defeats the object of it’s concept (promoting all natural juice) because what they have done to the fruit is, in reality, unnatural. However, it has got people talking world over. So surely, the campaign is a success either way? At ADO towers, we love the idea. What do you think?